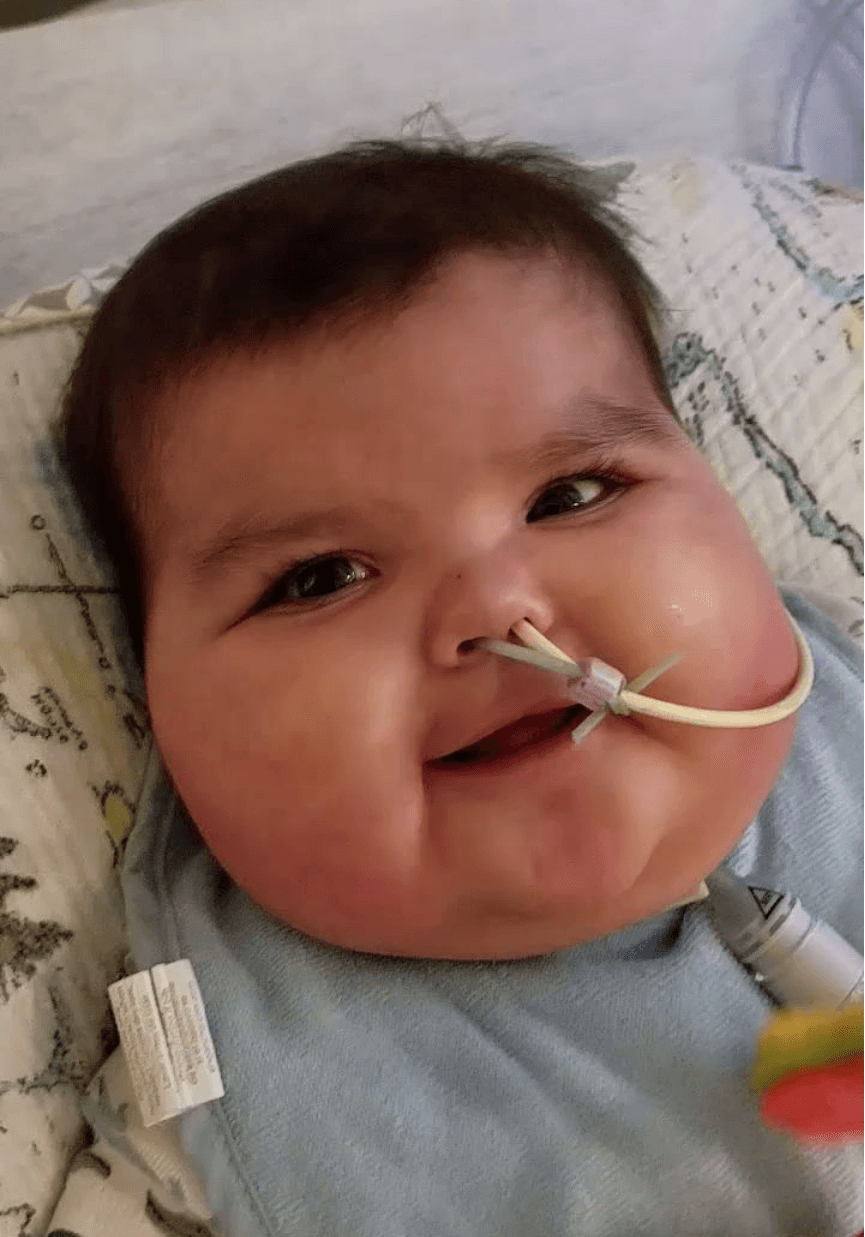 "That sweet, strong, brave, angel was our hero."

Josh came into the world sooner than he planned. An induction at 37 weeks gestation became necessary when a routine scan found fluid around his lungs. When the birth itself wasn’t enough to expel the fluid, he was taken to the special care nursery. On the evening of the day he was born, Josh began to present with significant respiratory distress and he had to be intubated.

After 10 days of fluid drains, tests with few answers, and a failed extubation, we made the decision to move Josh to the NICU at Nemours in Wilmington, Delaware, (an hour long drive away) where he’d be able to receive more specialized care. We did this after a test showed that Josh had something called chylothorax, which was causing lymphatic fluid to build up around his lungs. But his lungs weren’t the only problem; Josh seemed to have extra fluid everywhere. The swelling (edema) seemed to affect his digestion and his skin as well. Tubes were placed to drain the fluid, and Josh was put on a special low fat formula that helped prevent lymph fluid from accumulating.

Josh was tube fed from day one, but even with a nasogastric (NG) tube he spit up constantly. Eventually they attached his tube to suction to remove anything that had backed up to his stomach before he could spit it up. This is how they were able to eventually increase his feeds. For a while, he showed steady – if slow – signs of improvement. He always had a drainage tube in, whether it was in his lungs, his abdomen, or both. But eventually it became more and more difficult to keep up with the fluid.

When Josh was 2 months old, he had a study done that showed he had something called Central Conducting Lymphatic Anomaly (CCLA). This incredibly rare and little understood condition meant that Josh was lacking a thoracic duct – an essential component of the lymphatic system that moves lymph fluid throughout the body. We were heartbroken to learn that surgical repair wasn’t an option. With time, his lymphatic system would develop better pathways and learn to drain itself in a way that was effective. We were looking at anywhere from a couple of months to a couple of years for this healing to happen.

A few weeks after the CCLA diagnosis, Josh was started on  a regimen of diuretics as well as a medication called Sirolimus, which has been shown to help certain complex lymphatic anomalies. Our new goal was to dry out enough of the lymph that we could get Josh off of the ventilator. If we could get him off of mechanical ventilation and off of the comfort medications necessary for any intubated patient, we could hopefully bring him home.

Between the CCLA, the feeding problems, a bowel malrotation, and a congenital heart defect called pulmonary valve stenosis, Josh’s doctors decided to run a panel to screen for genetic disorders. We were both saddened and relieved to discover an answer to the medical mystery that was Joshua: a mutation of the CBL gene. This genetic disorder falls under the same category as Noonan Syndrome, something the doctors had suspected Josh might have.

Unfortunately, with the CBL diagnosis came the next bit of bad news. Josh had a rare form of blood cancer called juvenile myelomonocytic leukemia (JMML). While the cancer was in a relatively mild state, the severity of it would wax and wane. It explained the many times that Josh presented with a fever and a high white blood cell count without any identifiable cause. The good news was that, because the JMML was caused by his CBL mutation, it also had a good chance of going into spontaneous remission. Like the CCLA, it was another case of wait and see. We just needed to buy him the time his body needed to heal.

In spite of the wave of diagnoses in his first few months of life, Josh kept fighting. In spite of the rough hand he was dealt, Josh was most often calm and happy. We followed his lead and took everything in stride. We cherished every moment with him. We knew he was living on borrowed time.

When he was about 4 months old, Josh was successfully extubated for the first time. With that came medication weans. And every time that his body was stressed, Josh’s JMML would flare up and his edema would increase. Keeping him comfortable while employing necessary interventions was a delicate balancing act. Eventually we realized that the tube feeds were only hurting him, and the decision was made to switch Josh to full time Total Parenteral Nutrition (TPN) – an IV only source of nutrition. Without the formula, Josh’s edema decreased.

Over the next two months we began to make plans to get Josh home. It was a slow process, but one we didn’t mind. As Josh weaned from the comfort medications, he developed more and more personality. He finally figured out smiling. He loved to look at lights and mobiles and things that moved. His favorite toy – a rainstick – made him literally vibrate with wonder. He loved to be upright and rarely tolerated lying down fully. We finally started to relax and enjoy our time with him, rather than waiting for the next shoe to drop.

We were well on our way to getting him home when the next blow hit. One night when he was 6 months old, Josh was intubated after he stopped breathing. His throat had swelled up from edema as the result of an infection in his blood. But his throat was only one problem he faced; within a few days the fluid was everywhere – lungs, abdomen, and most notably, in his skin. He got to the point where he was so swollen he couldn’t open his eyes and could barely move at all. We’d seen him get very swollen in the past, but never quite as bad as he got over the next couple weeks. While antibiotics quickly cured the infection, the damage was significant. His body was stressed, which caused his JMML to flare and his edema to overwhelm him. Over two weeks later, the swelling finally stopped, and Josh began to show signs of improvement. But he never fully recovered.

Over the next few months, Josh was intubated and extubated many times. Eventually, his doctors said it was time for a tracheostomy. We were concerned about the procedure. We’d been cautioned against it months before; they told us that with his lymphatic anomaly, it was possible that the trach would negatively impact the lymphatic vessels in his neck, and the swelling would be insurmountable. But suddenly we didn’t have any choice. If all went well, a stable airway would give him the time he so desperately needed for his lymphatic system to grow.

Recovery from the tracheostomy procedure did not go as smoothly as we had hoped. Josh got progressively more swollen, much like during his infection 3 months prior. But we maintained hope. We learned that even for children without lymphatic anomalies, post-trach swelling is not unheard of. We did anything and everything we could to facilitate fluid drainage: medication, drains, lymphatic massage. And once again, all we could do was wait.

The swelling did ebb, and Josh showed improvement for a while. For 2 months we made wonderful memories with our little fighter. Josh was happy, curious, full of wonder. We started once more to talk about bringing him home. We met with home nursing agencies, we trained to change his trach and his central line dressings, we learned how to move him and we brought him on frequent walks around the children’s hospital. We bought him ALL of the toys, brought in fancy mats and jumpers for him to play in. We worked on his strength and his stamina. We played with him and laughed with him and loved him with everything we had. We researched tirelessly, and got Josh involved in a study at the Children’s Hospital of Philadelphia. He even received approval for a medication called Trametinib, a chemotherapy drug that showed some promise of helping treat CCLA (and, as a bonus, had the potential to help the JMML as well).

We don’t really know why the edema came back. We never could point to any one reason for it. At first it was the formula, then it was the JMML, stress from numerous procedures, certain medications, weaning medications. It was probably some combination of all of those factors; we’ll never know for sure. But an increase in swelling meant an increase in diuretics to combat it. And gradually his kidney levels started to become more and more concerning. For a while we had struck a precarious balance between edema and kidney function, but by the time Joshua was 11 months old, his kidneys were failing. After spending every day of his life fighting alongside him, there was nothing more that anyone could do.

On November 6, 2019, Josh passed away peacefully in our arms.

That sweet, strong, brave, angel was our hero. He changed our lives and we wouldn’t change a thing about the time that we had with him.

Joshua, we miss you so very much. You filled our lives with such joy. And during your journey here we grew so much. You will live on in so many ways; most of all in our hearts and the incredible memories you gave us. Thank you for fighting so hard to give us the time that we had. We love you always.

There aren’t many organizations out there that provide resources, support, and funding for Josh’s particularly rare lymphatic anomaly (CCLA), and the LGDA is one of the few that do. Their resources pointed us in the right direction in a very confusing and scary time in our life. I can’t think of a more fitting way to honor Josh’s memory than to help others facing similar situations. It is our greatest wish that Josh’s time here can impact other families and children with rare medical conditions. Following his passing, our fundraiser in honor of Joshua raised over $10,000 for the LGDA. We will continue to support this wonderful organization with yearly fundraisers. While it doesn’t lessen the pain of losing Josh, it does bring us joy to be able to make a contribution in his name. It also helps him live on through the difference this will make for others; it gives his life meaning even beyond the mark he left on everyone who cared about him. To us, that is everything.